Our success stories in EMEA

For out-performing our peers in delivering more cross-border Yen issuances and for our leading role in all key themes driving the yen market, Mizuho Securities has been awarded Yen Bond House of the Year in the 2019 IFR Awards for the second year in a row.

IFR said, “Mizuho Securities maintained its dominance in the international yen market by successfully underwriting bail-in-able bonds, leading almost all sovereign issues, and helping first-time issuers. Mizuho earned bonus points as it became the only Japanese bank among the bookrunners hired for Berkshire Hathaway's massive yen deal, extending its lead over Japanese competitors. In a low yield environment with bail-in bank debt, emerging-market sovereigns and longer-term debt firmly in fashion during 2019, Mizuho was active in all those segments, topping the international yen league table with ¥820.6bn (US$7.5bn) and a 22.8% share, five percentage points clear of second place.” 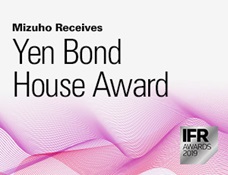 The IFR Awards is considered to be the most prestigious event in the global capital markets calendar. It sees over 900 of the world’s most senior investment banking professionals gather to celebrate capital markets excellence.

Receiving this award for the second year in a row is testament to the continued effective collaboration between all the Debt Capital Markets teams across regions and entities, and has not been achieved since we received the accolade back to back in 2009 and 2010.
Why we retained our title as IFR’s Yen Bond House of the Year >

Mizuho International acted as financial advisor to AfDB on the transaction. Juan-Carlos Martorell, Managing Director, co-head of securitised products and structured finance at Mizuho, comments that his firm was also “very happy” with the transaction. Particularly, he adds, because it pioneered the use of synthetic securitisation for capital relief for the MDB community and also achieved the reduction of RWA under S&P’s rating agency methodology, because MDBs are unregulated banks.
Impact of the Year Winner: Room2Run 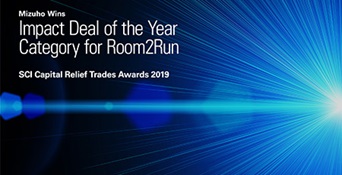