EuroFinance 2018: Treasury in an Era of Unknowns and a Constant Cycle of Educating and Being Educated 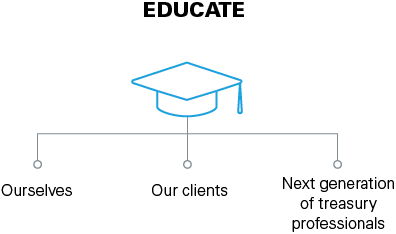 I recently had the honor to take part in the wrap-up panel at the EuroFinance West Coast event in San Francisco. Entitled “What have we learned about the future of treasury,” EuroFinance Chairperson and Panel Moderator Bob Novaria led off by asking that question of each panelist.

There are the known challenges, such as the need to get up to speed on the broad sweep of global regulations, and unknowns, such as the impact of trade wars and the utility of promising, but experimental and expensive, technology. In short, a treasurer has to be able to see around corners to help protect their companies. And that only comes when you are in a constant cycle of educating and being educated.

Easier said than done, however, when one looks at the many topics treasury professionals are required to be well-versed in. Below are a few of the areas that it is critical to have a tight grasp of all the facts. 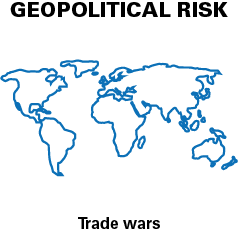 With trade wars looming, geopolitical risk, previously a discipline rarely studied by treasurers, is becoming a very big deal. Populist political figures are enacting a more nationalist agenda. This has been around since the beginning of politics, but today, this is no longer talk. We discussed the escalating actions and rhetoric that could result in a full blown trade war between the US and China.

We also spoke about Brexit and its impact on treasury functions. Collectively, the European Union streamlined a lot of regulations for treasurers, but what are the implications when the fifth largest economy in the world leaves that Union? 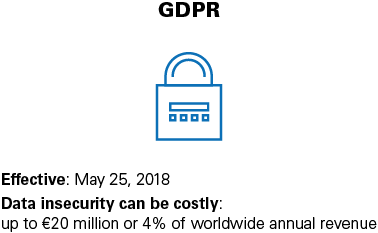 Evidence of an ever-toughening regulatory environment that is getting increasingly difficult to keep up with, The European Union’s General Data Protection Regulation (GDPR) will come into effect on May 25, 2018. We polled the audience to see how many treasury professionals were aware of GDPR and its potential implication, and relatively few were. They should be aware! The new regulation stipulates that a breach in data, even outside of the EU, could lead to a maximum fine of €20 million, or 4% of worldwide annual revenue! This is certainly something to review and ensure compliance. 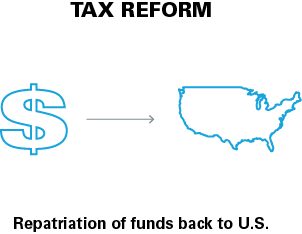 Major tax reform was approved by Congress in the Tax Cuts and Jobs Act (TCJA) on December 22, 2017. We discussed actions treasurers may wish to take and how the reform may affect global liquidity management structures that are currently in place.

For example, will treasurers of US companies with international revenue bring excess cash back to the US under the favorable terms of the new tax code? Many treasurers see this as a window to repatriate cash and pay down debt, repurchase shares, or reward shareholders. But the decision depends on where companies are in the business cycle. Those still expanding internationally may not want to repatriate in the near-term. 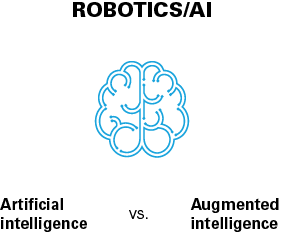 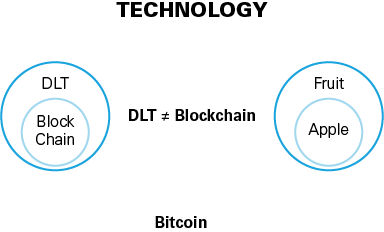 During the course of spending a considerable amount of time speaking about innovation, many at the conference said they’ve heard techies, the media, and even treasury professionals use the terms Distributed Ledger Technology (DLT) and blockchain interchangeably and thus incorrectly.

An important aspect of the DLT universe is that all blockchain’s are DLT, but all DLT is not blockchain; the same way that all apples are fruit, but not all fruit are apples. For treasurers who want to find out more about how blockchain works, it was suggested by one FinTech professional that they should dabble in Bitcoin. But with Bitcoin hovering at about $8,000, that’s an expensive dabble.

However, the promise of being able to create a recordkeeping framework whose integrity is unquestionable and access universal, makes understanding the technology mandatory.

There are numerous technologies available that are being piloted that may be able to help treasury in keeping records verifiable, auditable, and immutable. Some Fintech firms and banks have pilot programs that relate to trade, some to cash, and yet others to different forms of record-keeping used in banking. Technology firms Ripple and R3 were both cited as providing DLT pilot programs that have applicability for streamlining today’s banking environment.

But outside of these pilot programs, what innovation can we use today? 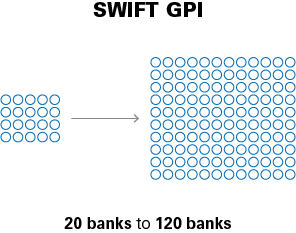 SWIFT gpi was noted as an example of technology that banks can use now to better track cross-border payments. With inherent widespread adoption by banks, SWIFT gpi will attempt to provide clarity for all of the unknowns (where is the payment, what fees are charged by whom, etc.) of cross-border payments. SWIFT gpi, an interim step toward the future, focuses on creating efficiencies for SWIFT users and their clients through advances in technology. Since the launch of the first phase in 2017, more than 20 banks have begun actively using these services and an additional 120 banks are expected to implement the service in the near term. 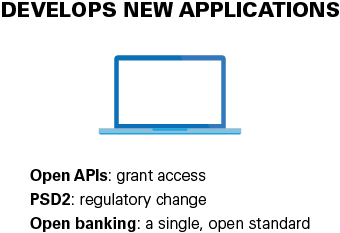 Open APIs (Application Programming Interfaces) were also discussed in the context of the work that Europe is doing to ensure that source code is available publicly and third-parties are allowed access to these to develop new applications. The EU’s Second Payment Services Directive, commonly known as PSD2, requires payment service providers, such as banks, to grant third-party providers access to customer account data assuming customer consent. Open APIs are one way to do this. Interestingly, the UK has taken this one step further. Through the Open Banking regulation, which came into effect in January 2018, nine UK banks are mandated to grant access to data through a single, open API standard. Will other countries follow the UK’s lead? 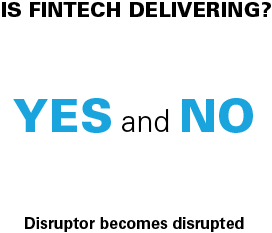 Finally, we discussed whether FinTech is delivering. The answer seems to be yes and no.

FinTech is definitely enabling banks to provide the digital banking services to the market that consumers are demanding. And it is also proving that alternatives exist to the current banking infrastructure. However, we noted two challenges.

First of all, the fact that banks have invested significantly over the decades in existing infrastructure means it won’t be replaced overnight and that will slow the adoption rate of new technology. Secondly, things like the payment ecosystem must evolve in tandem. So even if banks invest in new technology to enable new payment methodologies, the existing payment infrastructure employed by central banks around the world needs to adopt new technology.

Peer-to-Peer (P2P) payment networks were highlighted as a disruptive technology that seems in part to have been more recently disrupted by banks, at least in the US. P2P payment networks, initially created by technology companies such as social media outlets, were created to allow low value payments between peers, taking some of these types of payments away from banks.

Popularized by millennials, examples of P2P networks include Venmo, Square, WeChat Pay, Alipay, and Snapcash. A challenge with many P2P networks has been the amount of time it takes to process the payments and the maximum value (separately and in aggregate) of payments pushed through these networks.

Traditional banks are fighting back. For example, 31 US banks and credit unions with a combined 86 million customers using mobile banking apps launched Zelle, a P2P network, which allows bank customers to make P2P payments to other Zelle users. While Zelle does not have the social network component of some other P2P networks, it generally offers a higher maximum value (separately and in aggregate) of payments pushed through its network.

So in this sense, FinTech is indeed delivering. Banking services disrupted by FinTech often are adopted by banks to deliver a better experience to clients!

A consistent theme throughout the conference was getting to understand the unknowns and address the many challenges that we collectively face in treasury. Subject matter experts were brought in to help drive that cycle of educating and being educated in regard to ourselves, our clients, and the next generation of treasury professionals. In a profession impacted directly by a global mosaic of diverse and dynamic developments, EuroFinance provided the forum to obtain focus and clarity.