Equity markets continued their downward trend in Q2 2022 as the S&P 500 suffered its worst first half of a year since Nixon's presidency in 1970.  The war in Ukraine continued to persist, but a majority of investors shifted their attention to inflationary pressures on the world economy and what central banks around the world are doing to combat it. Since its last meeting in March, the Fed increased the fed funds rate by 125bps - resulting in new dot plot projections of 3.4% by December.  The Fed's ultra hawkish stance comes at a time where U.S. inflation has hit a 40 year high as lockdowns, war and supply chain issues have caused prices to significantly increase.  As a result, consumer sentiment was at an all-time low as everyday necessities were at unsustainable prices for the majority of the population.  Going forward, many investors will be keen to understand how the Fed plans to handle the July Fed meeting and beyond in the face of these persistent inflationary pressures.

The issuance market continued its sluggish performance in Q2 2022 as several issuers, both private and public, stayed on the sidelines due to volatility and ambiguity in the market.  As of quarter-end, the VIX was up 67% YTD - significantly above the issuance-friendly 10 - 20 range.  Compared to Q2 2021, IPO proceeds were down a staggering 93%, while secondary proceeds (Follow-Ons and Converts) were down 65%.

Although IPO issuance has been light relative to the last two years, this year's performance has improved - albeit with a much smaller sample size.  As of quarter-end, excluding Chinese listed companies, the IPO class of 2021 had an average and median return of (46%) and (55%), while the class of 2022 garnered a average and median return of 7% and (17%), respectively. 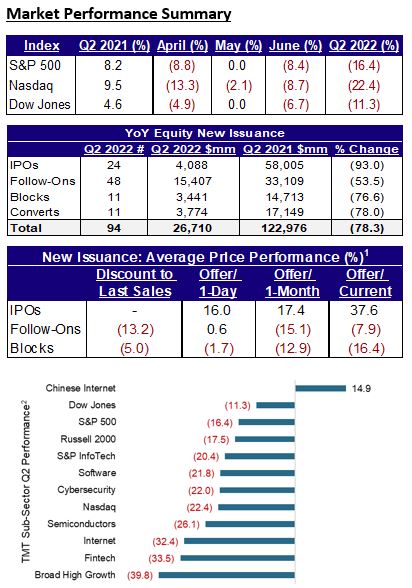 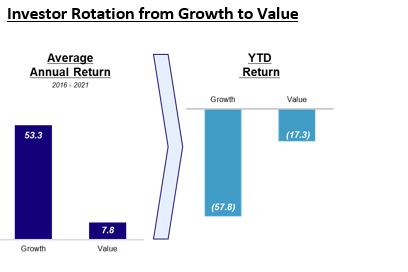 There were no TMT IPOs of any significance that priced during Q2 2022.  This was the first time since Q1 2016 that a TMT IPO over $100mm did not price in a quarter.

The largest equity offering of the year thus far came out of the TMT space.  Serial issuer American Tower (Ticker: AMT) priced a $2.4bn Follow-On to help fund its acquisition of data center owner CoreSite Realty (Ticker: COR).  Shares were sold at an impressive 1.4% file-to-offer premium and a mere 2% discount-to-last trade.  These statistics illustrated there is still investor demand in the new issuance market for businesses with proven track records and attractive growth platforms.  Mizuho served as an Active Bookrunner on the deal.

Many public companies have felt the brunt of the market sell-off, but none other than those in the TMT space - especially the 2021 IPOs (as noted above).  Many of these companies have erased gains for investors and seen their valuations decrease to at, or even below, pre-COVID levels.

Within the TMT space, FinTech companies and High Broad Growth companies have suffered the most as both sectors are down (46%) and (56%) YTD, respectively.  The market has seen a massive rotation from growth to value - the latter outperforming the former by 41% YTD. 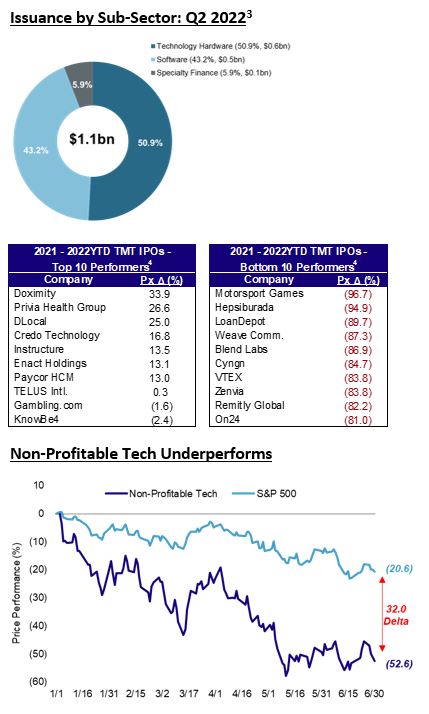 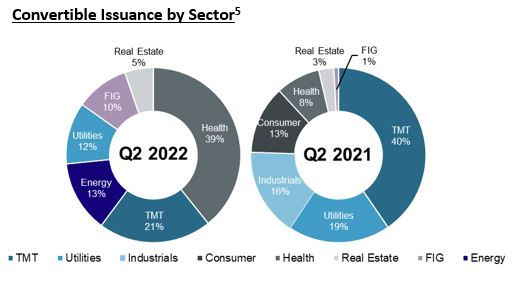 TMT issuers accounted for 27% of convertible deals priced and 21% of proceeds raised.

Mizuho still believes the convertible product offers a hedge to equity exposure for most issuers as the market grapples with volatility and uncertainty caused by the Russia / Ukraine conflict and a rising interest rate environment. 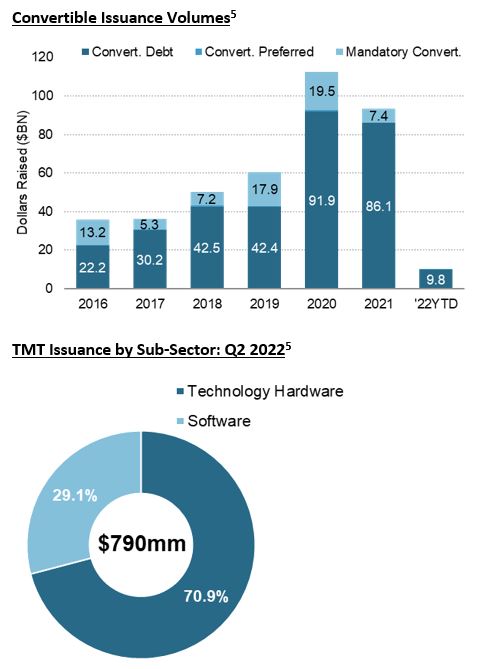 China lockdowns and the Russia / Ukraine conflict have had profound effects on supply chains and commodity prices around the world.  At one point in Q2 2022, oil prices reached $130, while gasoline costs increased nearly 50% YoY.  Since then, prices have decreased significantly but continue to trade above $100 even as President Biden proposed a gas tax holiday - which hasn't been attempted since 2008.  While many believe the economy has hit peak inflation (currently at 40-year highs), there is still reason to believe that pricing pressures in particular industries could still prevail and affect the U.S. consumer.  This was evident during earnings season when conglomerates such as Walmart (Ticker: WMT) and Target (Ticker: TGT) surprisingly revised downward their 2022 outlooks citing rising supply chain costs (i.e. labor, food, etc.).  However, from the most recent data, U.S. hiring remains strong (unemployment rate near 50-year low), while consumption indicators suggest demand is holding up despite the blow to real disposable income from higher inflation.  It is important to note that consumer spending did fall in May, while prior months were revised lower.  Although demand does not seem to be collapsing, it could be suggesting an economy on somewhat weaker footing than previously thought

2. Russia / Ukraine Conflict Persists...
In the minds of investors, the war in Ukraine has definitely taken a backseat to inflation and the Fed. However, that does not mean the ongoing conflict has stopped affecting the global economy.  The war and western sanctions on Russia have disrupted several supply chains in numerous markets - just as consumption increased following the pandemic.  With no end in sight and no reason to believe the war will end in a peaceful truce, commodity prices (i.e. oil, wheat) will continue to be volatile in light of this uncertainty.

3. The Fed Maintains its Hawkish Stance...
After increasing the fed funds rate by 125bps in Q2 2022, the Fed is likely to increase rates by 50bps or 75bps at its July meeting.  The real question is how many more times will they hike interest rates, while being cognizant of the recessionary pressures that the current environment is facing.  Following their most recent meeting in June, Fed Chair Jerome Powell noted that steep interest rate hikes could tip the U.S. economy into recession and a soft landing would be "very challenging."  At the same time, in their post-meeting commentary, the committee most notably removed the line stating that they "expect inflation to return to its 2% objective and the labor market to remain strong."  It is logical to think that the second half of the year will be largely driven by the Fed's actions.  As a result, traders are now focused on if hikes will be extended past the U.S. midterm elections in November or not.

4. China Starts to Open Back Up...
During Q2 2022, the Chinese government showed signs of ending its year-long regulatory crackdown on its Tech companies.  As a result, the Chinese Internet companies listed on U.S. exchanges had their best month in June since January of 2021.  At the same time, the government recently reduced quarantine times for inbound travelers - their biggest shift yet in their strict COVID policy.  As the world's second largest economy continues to be an outlier with regards to how they combat the virus, economists are now expecting Q2 GDP growth to weaken to just 1.5% YoY.  The slow recovery and threat of repeat disruptions of lockdown has pushed the government growth target of 5.5% for 2022 further out of reach. These companies will be a notable sector to watch in the second half of the year.

These deals amount to 12% of the total proceeds raised during the quarter.

As noted, Mizuho was an active bookrunner on the largest equity offering of the year thus far - American Tower, which raised $2.4bn in early June.