In 1835, Charles Darwin explored a small isolated group of islands 1000km off the coast of Ecuador. What he found here was groups of birds, tortoises, and other wildlife that were quite distinct, both from those on the other islands in the chain, and from those living elsewhere in the world. Here, Darwin formed his theory of evolution, believing that isolation shapes development, and adaption occurs to meet needs of the specific environment. This leads to distinct differences within the same species.

In modern business, “Galapagos Syndrome” has become a metaphor used to describe products, services, and even processes that have developed with a focus on a single market or culture, making them distinct when compared to the rest of the world. Often this term has been used when discussing the progression of Japanese products over the past 30 years.

In 1979, Nippon Telegraph and Telephone launched the world’s first 1G mobile phone network. That year, Sony also released the first portable cassette player, the “Walkman”. In 1999, NTT DoCoMo brought mobile internet to Japan with i-mode, and 3G in 2001. Japan debuted the first camera phone in 2000, and introduced mobile payments in 2004.¹

While all were ahead of their time, development occurred using a market standard common in Japan, but relatively unused, or unknown, in other markets like Europe and the US. A good example of this is FeliCa network developed by Sony and DoCoMo, which powers payment cards like the Japanese Suica or the Octopus in Hong Kong. These utilized NFC (near field communication) technology similar to what is now found in Apple or Android Pay, but with a reverse transfer field drawing power and returning data from an external powered reader.

In the Financial Services sector, Japanese banks have similarly advanced beyond their peers with payment mechanisms and in-house banking services available to consumers long before any seen in Europe or the US. These have further developed to meet the needs of Japanese corporations.

Because of this, many unique services offer the Japan market significant convenience and efficiency, which isn’t found anywhere else in the world. For example, Japanese customers have been able to choose multiple invoice and payment methods for consumer services, whereas consumers in other mature markets have had more limited choice. One payment method within the Kessai Navi service, offered by Mizuho Factors Limited since 1977, allows customers to download an invoice and use that to make a payment at one of Japan’s many convenience stores. 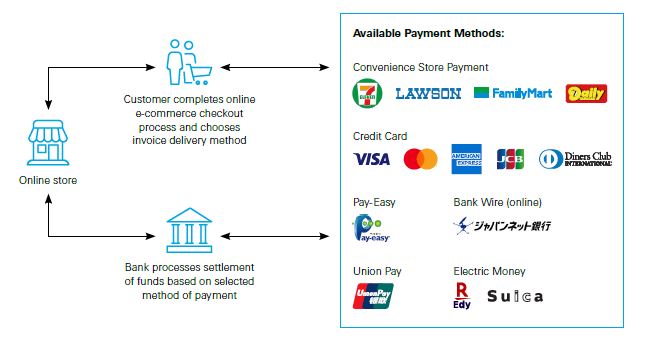 Clearly, Japan is an innovator – However …

Despite the obvious innovation of so many services over the years, much of the innovation was geared to the domestic market with little uptake internationally. For example, when Sharp launched the camera phone in 2000, it became very popular, very quickly, in Japan, but much less so in other markets. A few years later overseas, Apple and Android launched what became a popular smartphone alternative, utilizing similar technology to that available in Japan years earlier, but with far greater adoption worldwide.

Similarly, many Japanese banks and the Japanese payment systems also developed with innovation at their core. However, much of this innovation remained in Japan with systems that work fantastically locally (and in the local language) but gets lost in translation elsewhere (no pun intended). For instance, most institutions allow consumers and companies to complete local tax payments online, something that is not universally available outside Japan. The caveat is that these are domestic payments; you must complete all domestic payments in Katakana characters only. Therefore, if you do not speak Japanese, or as a company do not employ those who do, then you will find it very difficult to initiate payments in Japan.

Now, while working domestically you will find that the system is quite efficient, and promotes speed of payment, however, as an international user you may find yourself mired in exactly the opposite. The financial sector built its clearing system in Japan on its own network (Zengin System), solely in the Japanese language to handle all domestic interbank transfers.

Within this system, the Bank of Japan tasks the BOJ-NET Funds Transfer System (BOJ-NET FTS) to handle settlement of the more than 1.6 billion transactions per year²; on both a real-time gross settlement (RTGS) for high-value, where you will find many, if not all, of the international and foreign exchange transactions. BOJ-NET also processes designated-time net settlement (DNS) for low-value payments, where you will find the vast majority of domestic payments. Which system rail your transaction travels will determine just how complicated, or costly, your payment may become.

Even a simple international transfer with one of the major institutions may require physically going into a branch, as a part of Japan’s AML policies, meaning that companies who operate in the market without opening local offices often require a local service provider, such as accounting firms, to assist in this process.

Accompanying these wire transfers are often transfer fees (sometimes viewed comparatively high), assessed during Bank of Japan international clearing, as well as with wide spreads attached to any currency exchange. If that payment needs to find its way to a smaller local bank as a final destination, then be prepared to navigate both the global payments environment and the domestic transfer market and the (albeit less prohibitive) fees assessed during Zengin clearing.

When you look at it across an entire year, these fees can add up quickly. This means that for many non-Japanese multinational companies getting money into, or out of, this system can often be complicated and comparatively costly versus what you may find in other markets.

To accomplish these payments, you would likely be dealing with both a large global bank, and a domestic Japanese bank to handle each end of the transfer, and possibly two online banking platforms, one of which would function in Katakana only. You could use an outside platform, based in a familiar language, which provides access the Japanese market in some way. However, if you were to follow this path, you would often find that certain critical services were just out of reach.

In this case, proprietary or incompatible depends on your point of view.

For Now, a Zengin Workaround

Non-Japanese corporations are always trying to figure out how to manage proprietary or incompatible systems. This becomes tougher, working with the Katakana required in Japan, to efficiently effect payments in to, or out of, the country.

Enter FinTech. Globally, FinTech’s and big tech companies alike are edging into the territory previously claimed by these domestic Banks and challenging this isolated and traditional way of doing business. The same is true in Japan. However, in such a regulated market, many of these new entrants are competing on the outskirts of the financial services system, trying to provide entry points into the Zengin system for non-Japanese MNCs, by opening domestic accounts at local banks and providing access to these accounts (in an indirect way) for non-residents, to route payments to otherwise inaccessible beneficiaries.

While these transactions are not inherently a problem, the Bank of Japan has taken a stance of caution with regard to a new transaction flow, specifically looking at where and how the AML process takes place. Any transaction, which flows in this non-traditional method, may not meet the necessary minimum standards required by the traditional regulations of the system through which the transactions ultimately flow.

Additionally, many of these newcomers are promoting the use of translators to automatically format payment instructions in the Latin alphabet to Katakana. However, the success rate of translation is low, resulting in a significant number of returned transactions.

Banks are working within the system to create a bridge for non-Japanese corporates to create, and assign Katakana payment templates within a corporate treasurer’s system. Although this can take time to setup, it allows maximum flexibility in getting correctly formatted payments into the Zengin system, in the right language.

It also helps both banks, and their customers, in fulfilling Japan’s strict reporting requirements and procedures when any foreign transactions, such as international wire transfers (incoming or outgoing) take place. It also reduces the prohibitive costs often associated with sending payment instructions through the High Value Clearing System, and allows use of the Latin alphabet.

So, as you search for a provider who can meet your needs you must ask, what regulations could affect the payment process, who is in control of the funds from origination to destination, and is this within the framework expected by the government?

Mizuho Bank, as one of the largest financial institutions in the world, has been operating locally, and globally, trying to bring the two together throughout its 140-year history. The Bank supports its client base of major international corporations with both local Japanese/Katakana character services, as well as global platforms with a dozen or more language capabilities and market tailored payment interfaces.

While Japanese financial services will continue to have certain aspects of payments, a species onto its own, Mizuho will continue to work to create a compatible, global payments ecosystem and make establishing and operating a business in Japan, much easier.

Mizuho can help you best prioritize your needs and resources with a thorough analysis of the Japanese payment ecosystem, and where your company can fit within it.