In his book, An Inquiry into the Nature and Causes of the Wealth of Nations¹, Scottish Economist Adam Smith stated that human nature has the “intrinsic propensity to truck, barter, and exchange one thing for another.” This aspect of humanity was the incentive of European explorers, during the 15th century, to search for shorter trade routes to Asia that would circumvent the Mediterranean and Southern African routes. This search led the explorers to sail west and by happenchance, encounter the continent of the Americas.

Beginning with this chance cross-regional encounter, Asia and Latin America have a long history of close trading ties which have only grown stronger and more interdependent in recent years.

According to the Inter-American Development Bank’s study, Making the Most of Connectivity², Asia’s share in the region’s trade in goods almost tripled over the last two decades, growing from 9 percent in 2000 to 26 percent in 2018, when bilateral trade between them reached US$581 billion. Significant cross-regional trade in Latin America began with initiatives from Japan in the 1990s and expanded to China and South Korea in the early 2000s.

Japanese automobile manufacturers pioneered the expansion in the region by opening plants in Mexico to decrease operational costs and to take advantage of the geographical proximity to the US market. These initial forays by automobile manufacturers were followed by major infrastructure cross-regional partnerships including the planning and construction of railways such as Line 3 of the Panama Metro, water sanitation projects in Brazil, energy plants in Argentina, and mining projects in Colombia and Peru. More recently, commodity trading volumes between the two regions have exploded with exports of soybeans, fish oil, and copper in high demand, especially in the Chinese market.

In light of these new trade and project needs, Asian banks are deploying financial assistance either directly to corporations and/or governments in the region, or indirectly through their partnerships with the Inter-American Development Bank’s Trade Finance Facilitation Program (TFFP). Despite the Global Pandemic and the associated economic downturn, the trade partnership between Latin America and Asia continues to grow.

Collaboration and process efficiencies through FTAs have opened a new era of opportunities between Asia and Latin America. Complementary capabilities and vast natural resources have further strengthened commercial relations between both regions. 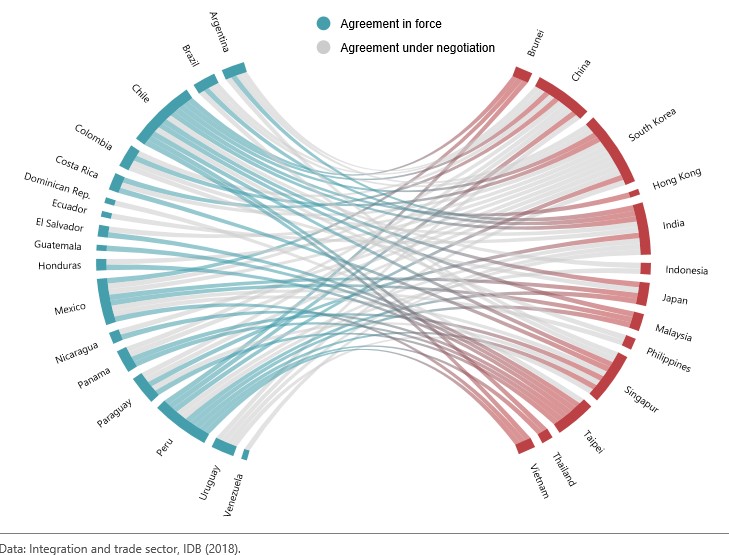 Latin America is an ideal source for well-priced goods and services for Asia’s discerning market, while Asia is a key technological and financial partner for Latin America’s stability and development.

For instance, BNAmericas³ reported on March 30th 2021 that The Japan Bank for International Cooperation and the Japan ICT Fund would also be among the interested investors of one of the most important telecommunication projects in the region: the transoceanic cable project in Chile which will connect South America and Asia.

The symbiotic relationship between Asia and Latin America is progressively becoming a vital component to the supply chain of Asian corporates. Conversely, Latin American corporations have expanded their commercialization operations into Asia. In order to capture trade finance opportunities from these growing cross-regional partnerships, Asian banks have expanded their presence, commitment, product offerings and expertise in the region. These increased efforts can be evidenced through two marquee transactions that were recently closed by Mizuho in the region:

Through these transactions, Mizuho has not only helped our important clients in the region to achieve their working capital and risk management goals but also given them the bandwidth to generate more revenue while coping with their customer’s increasing demands.

Japan is our home, Asia is our backyard, and we are a guest of honor in Latin America!

Through Mizuho’s extensive suite of trade finance product offerings in Latin America, we can assist corporates to optimize their inventory levels, shorten their receivables collection cycles, manage customer risk exposures and generate free cash flow by negotiating better payment terms with suppliers. With tailored flexible solutions to meet corporates’ dynamic needs while providing focused customer service, we are ready to support you in every aspect of your cross-regional business needs!