During July and August of 2022 the equity markets trended upward after rebounding from market lows in mid-June. Unfortunately, after a slew of disappointing macro-data releases and ongoing Fed hikes, markets quickly reversed course delivering the third-worst performance during the first nine months of a year since 1931. Headline inflation decreased since hitting its peak of 9.1% in June, but in order to combat ongoing inflationary pressure, the Fed maintained its hawkish stance and increased overnight borrowing rates by 150bps during the quarter. As a result, treasury yields have surged, growth stocks have seen valuations fall and the dollar has strengthened to levels many have not seen before. The Fed has indicated it would increase rates another 100-125bps by year-end -- resulting in the market pricing interest rates peaking at 4.5% in March of 2023. With many on the sidelines for now, investors are almost entirely focused on how much central banks will have to hike rates before they are content with inflationary levels that have impacted almost every sector of the world economy.

The issuance market in 3Q 2022 experienced an uptick in number of deals and proceeds relative to the prior quarter (albeit still low relative to historical averages). Many issuers took advantage of the positive market performance during the first half of 3Q 2022. However, as previously stated, the market rally was short lived, and by quarter-end, many issuers shelved deals due to an increase in market volatility. Compared to Q3 2021, IPO proceeds were down 94%, while secondary proceeds (Follow-Ons, Blocks and Converts) were down 58%.

Over $30bn of equity issuance took place in Q3 2022, of which only $2.1bn, or 7% of total issuance, were traditional IPOs. The majority of IPO proceeds came from the IPO of AIG's life and annuity division, CoreBridge Financial (Ticker: CRBG), which raised $1.68bn and was the only IPO over $1bn during the quarter.  This was a stark difference from Q3 2021, which saw five $1bn+ IPOs price. Since pricing, the company has traded relatively well (-6.2% at quarter-end) compared to the market. Mizuho was a Joint Bookrunner on the transaction.

In Q3 2022, TMT issuers raised $3.0bn, which amounted to 10% of overall issuance proceeds generated during the quarter. This amounts to only 7% of TMT issuance one year ago in Q3 2021. 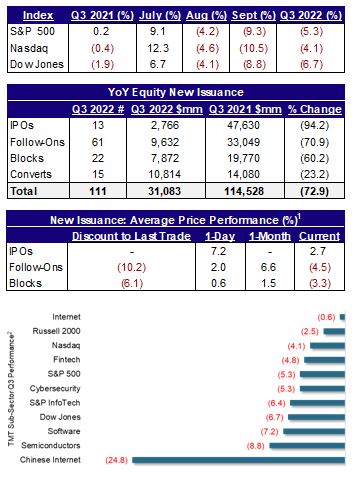 Investor Rotation from Growth to Value 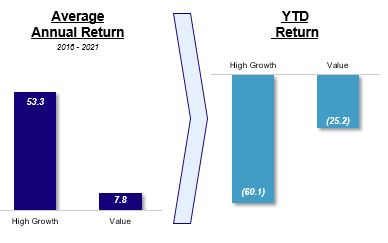 After not having a single IPO price for over $100mm in Q2 2022 (first time since 2016), investors saw AMTD Digital (Ticker: HKD) price a $143.5mm deal in July. Company shares have soared since pricing its IPO (reaching a return of 1,000%+ at one point), but the extreme price performance has also spurred an SEC investigation. Many would argue there has not been a “traditional” TMT IPO since Credo Technology (Ticker: CRDO) back in January of this year (Mizuho was a bookrunner).

The largest equity offering of the year remains TMT company American Tower's (Ticker: AMT) $2.4bn Follow-On that took place in Q2 2022. However, the sector did see a slight increase in convertible proceeds raised in Q3 2022 versus Q2 2022. Also, in September, CoStar Group (Ticker: CSGP) raised $750mm in a marketed follow-on at effectively no discount simultaneously with its announcement that it would be added to the S&P 500.

As market volatility and ambiguity persist, there is still a strong disconnect between private and public valuations -- as seen in the Class of 2021 IPO's trading performance. As several hopeful issuers wait for the markets to stabilize, we anticipate a selective, window-driven IPO market for the rest of 2022 and first quarter of 2023. This is evidenced by Mobileye’s IPO public filing on September 30th. While size has not been articulated, it is widely expected to be a multi-billion dollar IPO. Mizuho is bookrunner on the IPO.

Within the TMT space, companies in the FinTech and Internet sectors have suffered the most as they are down (49.3%) and (44.2%) YTD, respectively. As a result, the market continues to see a wide disparity in performance between growth and value names -- the latter outperforming the former by 32.1% YTD. 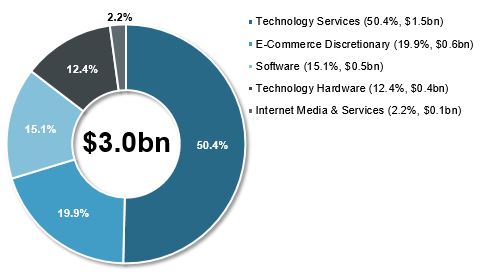 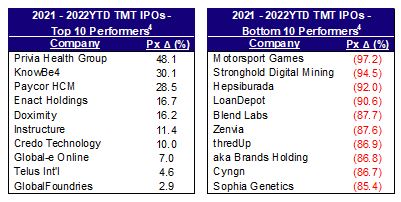 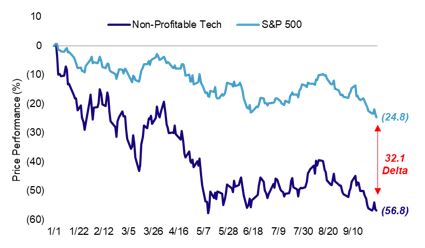 As previously stated, convertible issuance was relatively strong in Q3 2022 as overnight borrowing rates increased. Fifteen converts priced in Q3 2022 generating $10.8bn in proceeds. This was a decrease of six deals and $3.3bn in proceeds versus Q3 2021.

TMT issuers accounted for 20% of convertible deals priced and 13% of proceeds raised in Q3 2022.

Overall, terms remained relatively attractive in the quarter: three TMT issuers raised proceeds at average terms of 3.00% up 30% on a 5-year note. Furniture e-commerce company Wayfair (Ticker: W) was the only TMT issuer to overlay a capped call which raised the conversion price to 100% above the reference price of the shares underlying the convert.

Despite these times of market uncertainty and rising rates, we expect that the convertible market will continue to be active as companies view the product as a viable way to raise capital without significantly affecting their stock price. 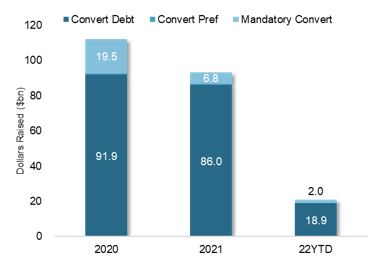 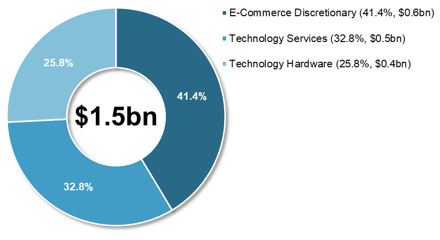 As previously noted, the Fed intends to raise rates another 100-125bps before year-end. In his post-meeting press conference, Fed Chair Powell reiterated that the Fed "wanted to act aggressively now and keep acting until the job is done.” The equity markets did not view these comments favorably, and quickly sold off as investors read this as a more aggressive, hawkish tone than they are accustomed to from Powell. Many have stated that the Fed was too slow to respond to inflation, and now with a series of jumbo hikes, the Fed is materially and adversely impacting the overall economy. The increase in overnight borrowing rates has also resulted in a stronger dollar, causing a fall in export demand from global counterparts. With a projected interest rate peak of 4.5%, equity valuations will continue to be under pressure as the cost of capital becomes more expensive than the levels companies saw during Covid. That being said, the Fed's decision on when and how much they will increase rates will be focused on two data points: inflation and employment.

Although inflation continues to fall off of its June high, it has not decreased as fast as hoped. As a result, the Fed has been forced to combat these inflationary pressures with a more aggressive monetary tightening (3 straight 75bps hikes). Higher pricing pressures have started to show in corporate earnings. For example, ahead of reporting its fiscal Q1 2023 earnings, package delivery conglomerate FedEx (Ticker: FDX) pulled its prior outlook on the back of worsening business conditions and global freight demand deteriorating materially. Consumers have also felt the brunt of the increased prices as many companies have started to pass the costs on to their customers. As Q3 2022 earnings get underway, investors will be keen on understanding how cost increases will affect revenue growth and multiples going forward.

Soaring energy prices driven by Russia's war in Ukraine and the resulting energy crisis have prompted ECB officials to start hiking rates for the first time in more than a decade. In September, the ECB increased interest rates by a historic 75bps. As the war continues and the Nord Stream pipeline experiences a rupture (suspected sabotage), the ECB is now weighing how to proceed as the ramp-up in prices is accompanied by ever-increasing predictions of a recession. At the same time, England's Prime Minister Liz Truss's unfunded tax cuts have caused a ripple effect in the country's asset prices. The biggest package of unfunded tax cuts in half a century caused a rout in bond markets that resulted in the Bank of England initiating a plan to purchase over $1bn of securities maturing in 20 years or more. However, after a substantial amount of public backlash, the U.K. government withdrew the plan -- causing even greater volatility in their markets. These dilemmas are just a prime example that the current global economy is highly correlated to central bank/government actions.

4. When will the IPO Market Open for Business...

Thus far in 2022, there have only been 24 IPOs (> $25mm & ex-SPACs) price for $6.4bn. 2022 is on pace to have the fewest IPOs price in a single year in the last 25 years as the pace of new issuance is running only slightly above the depths of the global financial crisis. This comes after 500+ companies went public from 2020-2021. After two years of high liquidity drove valuations to unprecedented levels, rising interest rates have increased the cost of capital for both private and public companies, causing companies to delay their plans to go public and to endure significantly recalibrated valuations. This coincides with the notion that a large cohort of companies that went public over the last two years were not profitable, and with the current macro environment, investors will likely shift their attention to near-term profitability rather than long-term growth projections. One can logically expect that the type of companies that will re-open the IPO market will be those that have a sustainable platform and that are either already profitable or will be in the very near-term.

These deals amount to 14% of the total proceeds raised during the quarter.

Mizuho is pleased to have acted as a Joint Bookrunner on 2022YTD's largest IPO, largest Follow-On and largest Equity-Linked transactions: