Based on factors such as the demographic aging of the population and social demands for improvements in accessibility at facilities utilized by many people, Mizuho has been advancing its "Heartful Project" since 2005 with the aim of improving ease of usage for its customers. From 2016, on the basis of the Law on the Elimination of Discrimination against Persons with Disabilities, we are endeavoring to move forward with further activities to promote barrier–free interiors and universal design projects.

Banks that anyone can use conveniently

Mizuho Bank has been promoting the Heartful Project since 2005. We are engaging in further barrier–free and universal design initiatives from three aspects: facility–related initiatives covering branches, facilities, and equipment; service–related initiatives covering customer forms and documents as well as Internet content; and psychological initiatives involving education and training to improve customer relations skills. Additionally, we display service marks on our website of branch information and at branch entrances to let customers know the status of each branch with regard to these initiatives. 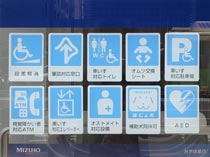 Barrier–free status of each branch indicated at the branch entrance

Since fiscal 2013, Mizuho Trust & Banking and Mizuho Securities have been moving forward with activities to promote barrier–free interiors and universal design projects in accordance with their business and customer characteristics.

Tackling improvements based on its own original specifications

Using the Tokyo Metropolitan Government's Barrier–Free Building Ordinance as a reference, MHBK has drawn up its own "Branch Improvement Standards" and is adopting universal design principles for its branch facilities. These standards have established eight priority items known as the "Eight Basic Specs." Improvements have been completed for all branch facilities for four of the eight specifications.

Our initiatives to achieve all–round barrier–free environments and universal design have been recognized, and MHBK has been awarded the Fourth Barrier–Free Promotion Award from the Minister of Land, Infrastructure, Transport and Tourism as well as other rewards from local governments and other associations.

*   The total does not include branches where these facilities are not required, such as single–story branches. 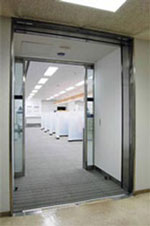 Doorways have been widened and doors automated to improve access for wheelchair users.

Parking space is provided for use by wheelchair users. 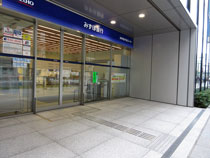 The ATM card and passbook slots are indicated by braille.

Using Mizuho Bank's branch improvement standards as a reference, Mizuho Trust & Banking has drawn up the Mizuho Trust & Banking Heartful Branch Improvement Standards and is advancing initiatives in accordance with factors, such as branch layouts, on the basis of those standards. Mizuho Securities is likewise making progress with initiatives geared toward its branch layouts.

Automated external defibrillators (AEDs) are installed at all Mizuho Bank, Mizuho Trust & Banking (excluding some sub–branches), and Mizuho Securities sales branches, and first–aid training programs are conducted from time to time for employees that include explanations on how to use an AED.

In addition to providing the means by which to use a range of services, such as telephone banking and Internet banking, that utilize and give consideration to users of text–to–speech software, Mizuho Bank has made available tools and services that assist smooth communications with customers, including with the visually or hearing impaired and non–Japanese. Mizuho Bank is also constantly devising improvements to make its forms and documents as well as ATMs easier for customers to use.

When upgrading its ATM screens, Mizuho Bank bases the changes on opinions gained from customers and incorporates universal design elements, such as in the screen layout and color configuration. As a result of its initiatives, Mizuho Bank obtained the finance industry's first "authenticated verification of ease of usage" from the user research organization Jitsuken. Following on from these initiatives, Mizuho Bank is making ongoing improvements on its ATM screens based on customer feedback. 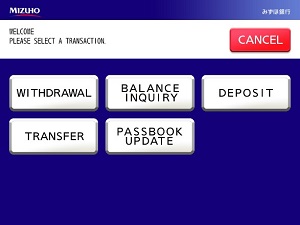 Conscientiously serving the needs of the disabled

Mizuho Bank and Mizuho Trust & Banking regulations now formally specify that customers with visual or other impairments must be assisted in completing procedures at service counters by having Mizuho staff read or write on their behalf.

We have also taken steps to provide enhanced services to the visually impaired, who cannot easily use an ATM for cash transfers, and customers in wheelchairs by confirming their needs when they arrive at a branch and then responding to them at a service counter. At the same time, a new lower cash transfer service–fee level, similar to the ATM usage fee, is charged for the provision of these services. (Eligibility for application of this fee may be confirmed by inspection of the customer's physical disability certificate at the time of the transaction.)

To raise the awareness of each employee, we provide training to encourage employees to think on their own

Believing that heightened awareness among individual employees is essential to remain a bank that satisfies its various customers, Mizuho Bank is promoting efforts to incorporate ingenuity and thoughtfulness in its day–to–day customer contacts and improving responses when welcoming and waiting on its customers. Specifically, we have created and issued our own manual &mdash; common to all employees and members of staff working in main branches — to assist our responses to customers with disabilities, elderly customers, pregnant customers, and others with special needs, and implement training using a video and other instructional tools. In particular, to be able to respond appropriately from the viewpoint of customers with disabilities, the spirit of the Law on the Elimination of Discrimination against Persons with Disabilities is incorporated into the manual in conjunction with the running of training programs.

As customers' ages differ depending on the location, for instance, the employees at each branch hold discussions and determine initiatives that are compatible with the characteristics of their branch. Since fiscal 2012, as part of our initiatives designed to improve response capabilities toward the elderly, we have conducted "dementia supporter" training courses that include practical content such as role play for lobby concierges and teller staff. In addition, we compile and share booklets that contain advice and case studies for staff who come into contact with elderly customers, and these booklets are utilized in training programs and to improve responses at each branch location.

We have also established the general rule that advisors at head office customer points of contact and branch lobby concierges be holders of the Care–Fitter qualification.

At Mizuho Securities, initiatives are conducted to improve the manners and responsiveness of staff to enable them to give proper services to customers, including the elderly. To enhance the level and responsiveness of services at branches and, to give guidance on proper customer treatment, Mizuho Securities has issued a guidebook entitled Basic Business Manners. In addition, for customers who have special issues that need to be addressed, Mizuho Securities also conducts a range of training programs to enable its staff to respond politely and to make improvements related to various issues with a clear understanding of the customer's perspective. Since fiscal 2015, Mizuho Securities has primarily been promoting the "dementia supporter" initiative among sales branch employees. Also, in each of its offices and branches, Mizuho Securities has identified issues from the customers’ perspective, and, through holding periodic discussion sessions, endeavors to increase awareness among employees and work toward improvements

Training that utilizes a wheelchair