Participated in the TABLE FOR TWO Program 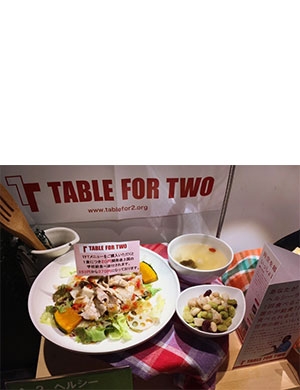 A TABLE FOR TWO menu 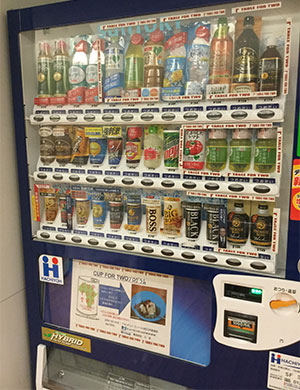 A TABLE FOR TWO vending machine

WWF donation corresponding to the number of non–bankbook accounts opened

On January 17, 2021, Mizuho Bank launched the new, non–bankbook "Mizuho e–Account" as part of moves to provide a paperless, environmentally friendly service that enables customers to conduct transactions "anytime" and "anyplace" without the need to visit branches. Paper bankbooks use the equivalent of five sheets of A4–size paper, so the usage of non–bankbook Mizuho e–Accounts also contributes to forest conservation. Furthermore, to help our customers feel part of these environmental protection initiatives, Mizuho pledged to make a monetary donation to the World Wide Fund for Nature (WWF) Japan corresponding to the number of Mizuho e–Accounts opened between January 17 and December 31, 2021. In the end, 588,211 Mizuho e–Accounts were opened during this period, thus saving the equivalent of around 2.94 million A4–size sheets of paper, with JPY 50 million also donated to the WWF. None of this would have been possible without the tremendous support of our customers. The donation to the WWF will primarily support biodiversity conservation initiatives in Japan and forestry protection initiatives in Sumatra, Australia, and other regions facing environmental destruction.

[Mizuho Bank] "It starts: Online bankbooks! Contributing to a better planet, with Mizuho's donation plan."
(The campaign finished at the end of December 2021.) 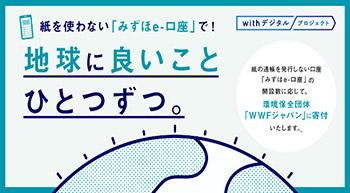 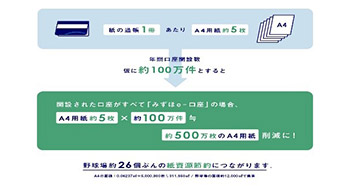