Previously, little progress was made in the development of renewable energy sources in the countries of the Middle East because of the abundant availability of low–cost sources of oil and gas in the region.

However, with the demand for energy accompanying economic growth and concerns about the future depletion of oil and gas reserves as well as the rising volume of gases that contribute towards global warming, the Middle East region has started to develop power generation from renewable energy as a means of meeting domestic energy needs and stimulate employment. Given the region boasts some of the highest irradiation levels in the world, solar power is likely to provide the greatest opportunities for renewable energy power generation.

For example, the government of Jordan is encouraging the utilisation and implementation of renewable energy resources as a clean and efficient generation of power and have taken steps to define regulations to promote renewable energy within its energy mix.

This initiative is being replicated throughout the Middle East region as a viable alternative to fossil fuel based generating assets. More generally, the take up of renewable energy in the region will also facilitate the export of fossil fuels and thus address a domestic resource issue shared by countries in the Middle East.

In January 2015, on the occasion of the visit of Japan's Prime Minister Shinzo Abe to the Middle East, in the presence of Prime Minister Abe and Dr. Abudullah Ensour, Prime Minister and Minister of Defense of the Hashemite Kingdom of Jordan (around that time), agreement was reached on financing in support of the development of a major solar PV power generation facility in the Ma'an province in Jordan. The Jordanian company Shams Ma'an Power Generation PSC (Shams Ma'an), is jointly owned by Mitsubishi Corporation, the Qatar corporation Nebras Power Q.S.C., and the Jordanian Kawar Group.

This project involves the construction of the largest solar power generating facility in the Middle East, at the time, with a generating capacity of 52.5MW. The energy generated is sufficient to power over 30,000 average local households in Jordan. By furthering the use of renewable energy, the facility will restrain the impact on the natural environment as it satisfies the rising demand for electric power in Jordan. 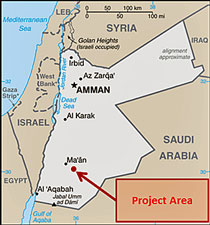 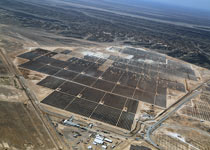 View of the solar panels of the facility
(Photo courtesy of First Solar, Inc.)

MHBK has built a successful track record in its understanding of the different renewable energy technologies in different regions around the world. Such knowledgebase is essential in order to identify and understand potential risks that may arise during construction and operation of any renewable energy power project.

MHBK provided a full set of integrated services and made a major contribution to successful arrangements. These services spanned the range from the early stages of the project, structuring of the financing schemes, analysis of risks, conducting contract negotiations, and handling administrative matters after the project financing was closed.

The level of due diligence conducted enabled the project team to assist the sponsors in the development of a bankable project.

The innovativeness of this project financing and its contribution to solving social issues have been recognized internationally, and, in March 2016, the project was selected for the "Environmental Finance of the Year 2016" award (in the Solar Finance category) by Environmental Finance magazine, which specializes in covering developments in environmental finance.

MHBK will continue to draw on its accumulated experience as it takes active initiatives in financing renewable energy developments in Japan and overseas.

Such achievements can only serve to further demonstrate Mizuho's renewables credentials and our experience as a leading project finance bank, together with our expert understanding of renewable energy sub–sector technologies and clearly set us apart from other project finance lenders.

Shams Ma'an is a good example of how project finance can be affective in the region. It shows how renewables transactions in the region are viable and it shows that the economics of it are actually competitive with other forms of power generation.