Indonesia, which has the world's largest geothermal resources, is planning to increase its power generation capacity to meet rising demand. As part of these activities, Indonesia is focusing on attaining a goal for geothermal power generation, but progress in this area is lagging behind plans. In view of this situation, in April 2013, construction of the largest–scale geothermal power facility in the world, with a total generating capacity of 321MW (hereinafter, the project), began in the Sarulla region of North Sumatra. This project is expected to eliminate power shortages in the region and to promote wider utilization of geothermal power.

Planning for this project began in the first half of the 1990s, but the project developer withdrew because of the impact of the Asian currency crisis, difficulties in fund–raising, and other factors. Thereafter, in 2006 Itochu Corporation, Kyushu Electric Power Co., Inc., Indonesian power company PT Medco Power Indonesia, and U.S. geothermal company Ormat Technologies, Inc. formed a consortium, purchased the development rights for the project, and began to consider going forward with the project. With the collaboration of the consortium members, the governments of Indonesia and Japan, and many other stakeholders, the project began to move forward. The experience and know–how of MHBK in the geothermal field was highly evaluated, and it was appointed financial advisor to the project in 2007. After conducting an economic feasibility analysis of the project, MHBK has played a broad range of roles, from providing support for contract negotiations to consideration of financial schemes.

As part of this project, a 30–year contract was signed with the national electric power company of Indonesia and the construction and operation of the geothermal power plant, which makes use of Japanese technology, will be consummated. MHBK prepared its own cash flow model that takes into account the many risks inherent in geothermal power plant businesses. MHBK also analyzed the economic viability of the plant in detail, ranging from estimates of the cost of development, construction, and operation, to preparation of forecasts of electric power output. As a result, however, many conditions changed from the time the original contract was concluded, including increases in construction costs, and negotiations were needed to review contract conditions, including the price of electric power sold.

MHBK calculated the power price necessary to be profitable and assisted the consortium in negotiations with the Indonesian government. However, reaching agreement with the Indonesian government, which wanted to restrain increases in electricity prices, was not easy. Although difficulties were experienced, we negotiated persistently, together with the consortium. As a result, and with some backup from the Japanese government, which wants to promote infrastructure–related exports from Japan, we finally reached agreement on the price of electric power in April 2010. Moreover, we continued negotiations on numerous conditions to reduce the risk related to the geothermal power business, thereafter. In April 2013, we concluded a long–term power supply agreement with the Indonesian national power company (Perusahaan Listrik Negara Persoro: PLN), and the same contract secured a guarantee from the Indonesian government for payments to be made by PLN under the contract.

Geothermal power projects require considerable time to develop and complete. Also, in comparison with other methods of generating electricity, assessing the volume of energy resources has higher inherent risks. For this reason, when funds are raised, they are usually raised on the basis of the overall credit of the corporate borrower, meaning that corporate financing approaches are applied. In contrast, project finance focuses solely on the profitability of the project itself and the flows of its earnings are the source of repayment. In this scheme, many of the participants, in the project, including banks, share the risk. Therefore, to encourage the development of geothermal power sources, MHBK proposed the use of the project finance approach to limit the risk borne by the participating companies.

To syndicate the finance for the project, the emphasis is on making it easier for the financial institutions, with the financial advisory and lead arranger in the lead, to provide funds for the project. Specifically, based on analyses of the volume of energy resources and economic feasibility, proposals were made regarding the structure of the project that took into account of the risk of exhaustion of geothermal resources, ways of reducing risk over the long time to completion of the project, and other risks. In addition, the Indonesian government provided guarantees for PLN's payment obligations and the Japan Bank for International Cooperation provided guarantees for the exposure of private banks on the basis of the guarantees provided by the Indonesia government.

After various adjustments were made between the financial institutions and the consortium members, in March 2014, a co–financing agreement was signed to provide a total of USD 1,170 million with the participation of the Japan Bank for International Cooperation, the Asian Development Bank, and a syndicate of six private banks, including MHBK. In June 2014, the first loan was made under the agreement.

Going forward, Japanese companies that manufacture equipment for geothermal plants plan to construct more power plants, one of which is scheduled to go into operation in 2016.

The project is believed to have contributed in a number of ways, including the improving of electric power shortages in Indonesia, broadening the range of fund–raising options for geothermal power plants, and contributing to infrastructure–related exports from Japan, which is one of Japan's important growth strategies. By continuing to be involved in the project through being the Agent Bank, and the know–how and experience accumulated during the course of the project, Mizuho seeks to contribute actively from the financial side to the development of renewable energy projects in Japan and overseas as well as to contribute to the promotion of infrastructure–related exports. 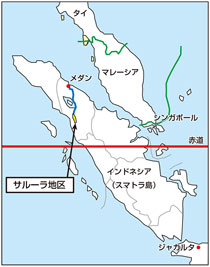 A quite long period of six–and–a–half years passed from the time Mizuho was appointed financial advisor through to the consummation of the related project finance. During this period, we faced a number of difficulties to overcome, including prolonged negotiations with the Indonesian government and the collapse of Lehman Brothers, etc. However, each time, we came up with ways of overcoming the difficulties with project sponsors and finally realized our objectives. When we heard the words of gratitude from the project sponsors at the end, we had feelings of relief and deep satisfaction. As a result of this project, we were thankful for being able to meet and work with such irreplaceable people from many industries and companies. Looking ahead, we want to draw fully on the know–how and experience we have gained, and in our work on a day–to–day basis, we want to promote the wider utilization of geothermal and other forms of renewable energy and contribute to economic and social development from the financial side.