Since 2014, Mizuho Financial Group has been a corporate sponsor of the TOMODACHI Initiative, a public–private partnership led by the US Government and a non–profit organization, the US–Japan Council, seeks to foster the next generation of young Japanese and American leaders.

Mizuho cosponsors the All–Japan Elementary and Junior High School Students' Environmental Art Contest. This contest is held annually to provide elementary and junior high school students with the opportunity to address the importance of nature and the development of towns where we can live comfortably. 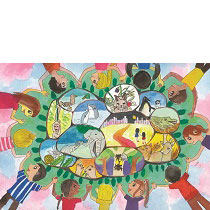 Since 2004, Mizuho Financial Group has been a cosponsor of the World Police Band Concert, for which police officers from various countries interact through musical performances.

Cosponsoring the "Daijobu" ('Are you OK?') campaign

Since 2007, Mizuho Financial Group has been a cosponsor of the "Daijobu" campaign, which promotes the regional environment for exchanging words "Daijobu" ('Are you OK?') casually in order to protect children and seniors from crime, accidents and natural disasters.
As part of the event, panels explaining remittance solicitation fraud and other activities were undertaken to raise awareness of crimes.